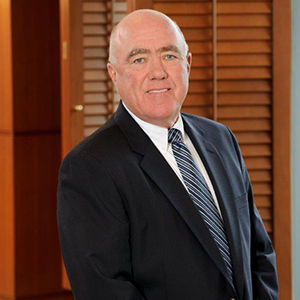 Jack Grady has been specializing in the practice of environmental law for 30 years of his 40-year career as a lawyer.

Jack has argued cases before several federal district courts and Federal Courts of Appeal, and has also represented clients on environmental aspects in numerous high value transactions, including several in excess of one billion dollars. Two highlights of his career, were when he obtained approval of one of the first nitrogen oxide (NOx) emission reduction credits in Georgia, and negotiated with the State of Georgia for a carbon sequestration agreement for the creation of greenhouse gas emission credits related to reforestation of a state-owned forest.

Jack’s experience includes serving with the U.S. Department of Justice (DOJ) as an environmental litigator. Prior to DOJ, Jack served briefly as staff counsel to the United States Senate Judiciary Committee, where he assisted in the management of legislative proposals on the Senate floor and participated in the preparation for and the conduct of Senate hearings on the nomination of Clarence Thomas as an associate justice to the United States Supreme Court.

Jack began his career by establishing his own trial and business law practices with offices in Boston and Salem, Massachusetts, before moving to the U.S. Department of Justice (DOJ), where he served as a Trial Attorney with the Environmental Enforcement Section, before joining Jones Day where he represented corporate clients in environmental litigation and enforcement; compliance counseling; transactional matters; due diligence; third-party liability and insurance coverage litigation.

Over his career, Jack successfully defended CERCLA parent-operator liability cases and has served as common counsel to a PRP group under the Comprehensive Environmental Response, Compensation and Liability Act (CERCLA) (Southdown v. Allen, 119 F. Supp. 2d 1223 (N.D. Ala. 2000) and successfully defended on appeal a favorable judgment of behalf of a client in a CERCLA parent-operator liability case (Atlanta Gas Light Company v. UGI Utilities, Inc. et al., 463 F. 3d 1201 (11th Cir. 2006)). He has managed the due diligence and contract negotiations related to mergers, acquisitions, and divestitures of businesses and properties with significant environmental profiles. His practice also has included general litigation matters, including defense of claims under the federal False Claims Act.

Jack’s trial work at DOJ resulted in favorable trial judgments and he assisted in the defense of these judgments on appeal.

While at DOJ, Jack received DOJ’s Special Achievement Award (1993) and two U.S. EPA Bronze Medals for Commendable Service (1994, 1995). He contributed as an instructor in several DOJ training programs and at EPA’s RCRA Workshop.

Additional awards and recognition include:

Jack has published articles and spoken on a variety of topics, including an article in the January/February 1999 edition of Mergers & Acquisitions magazine on the United States Supreme Court decision in United States v. Bestfoods. He has spoken on such topics as “Assessing and Allocating Environmental Risk,” (Textile Industry Mergers & Acquisition Institute, 1998) and the “Self-Critical Analysis Privilege and Its Application to Environmental Regulation,” (Georgia Chamber of Commerce, 1997).

BOARD OF APPEAL – CITY OF SALEM, MA: 1990 – 1991: Associate Member of the Zoning Board of Appeal for the City of Salem, Massachusetts.